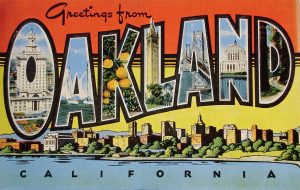 The idea for GentriFRIED was birthed by artist Barbosa Prince who for years has been producing thought provoking art that presses social nerve points. His Caution Mural in the Fruitvale District of East Oakland in 2015 has stood amongst a wide array of grafitti tagged buildings. The mural has stood as a reminder of the coming wave of gentrification in the area. Like the road sign format it is painted in, it warns current and new residents that there is an awareness and tension percolating in the neighborhood.

The Story: The bay area has evolved socially and economically from the waves of the digital revolutions,
from desktop publishing to the internet economy. These have been accompanied by rifts in the
social and cultural fabric. The San Francisco that was once a bastion of freedom and artistic
experimentation has been overrun by tech money and become a monoculture. Oakland, which
for such a longtime had lived in SF’s shadow and has a rich history of unparalleled diversity along
with more artists per capita than any other city in the country, is now under fire from a steady
flow of well funded techies moving in. Is Oakland to suffer the same fate as San Francisco? Will
long time families be displaced? will artists and the arts be kicked out to make way for affluent
refugees of SF and Silicon Valley? Can it be stopped? Can it be done differently? One thing is
for sure everyone in this story is GentriFRIED!

© 2016 Swirlpop All Rights Reserved • Made with ❤ by Themely